Innovative Digital Signage Examples to Inspire Your Own Campaign

The neat thing about digital signage is that it really takes the phrase “think outside the box” to a whole new level. With traditional banners and posters, marketers are limited to text and images, but with digital signage, businesses are only limited by their imagination. Some companies have found unconventional and innovative ways to use their signage displays that really redefines the meaning of consumer engagement.

This was an ingenious ad deployed at a subway station in Stockholm, Sweden. The digital display was fitted with sensors and featured a headshot of a model staring straight ahead with no movement on her end other than an occasional eye blink. When a train rolls in, however, her hair flies all over the place, just as it would if she were an actual person standing next to the platform. This was followed by an image of the shampoo product and the slogan “Makes your hair come alive.”

The energy drink that gives you wings has made full use of one of its promotional campaigns. The digital display ad featured a BMX biker performing a series of stunts while a consumer can interact with the screen by positioning a virtual Red Bull can within a certain spot on the screen. Participants who successfully complete the task are rewarded with a code that they can enter into an adjacent Red Bull vending machine to get a free can.

Pizza Hut is experimenting with a new type of ad in which the table that patrons dine on doubles as an interactive ad. Instead of a human server, customers will place their order through the touchscreen display. Customers can use their fingertips to make their selections, including the size, topping, and type of crust for their pizza as well as select additional side orders. Once the order is complete, a countdown timer is displayed showing when the order will be ready. In the meantime, the screen displays a menu of mini-games that customers can play while awaiting their food.

Whether a child or one at heart, anyone can enjoy the interactive experience displayed at Mt. Ommaney Shopping Centre in Brisbane, Australia. With a LED screen and webcam, participants can step in front of the display and engage in a sword duel with a cartoon avatar. Of course, this proved to be Kodak moments for parents who filmed their children engaging in an imaginary epic battle. The images and videos taken by hundreds of parents quickly made their way across social networks, which for the mall, meant instant publicity.

Dick’s Sporting Goods held a marathon in Pittsburgh with more than 30,000 runners taking part. On the sidelines were three interactive digital signage displays where attendees can browse and order the latest gear. All in all, while this example may not be as “outside the box” as some of the other aforementioned ideas, it really doesn’t matter because the event was a mega success especially after spectators used the hashtag #RunFor to promote the marathon through their Twitter and Instagram accounts. 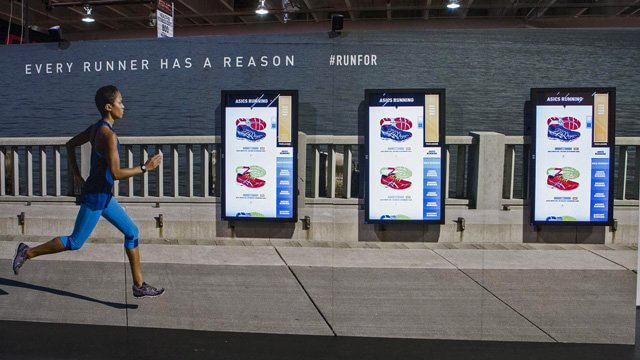 For the promotion of Pepsi Max, the soft drink giant had a digital display installed within the interior panel of a bus stop. Pedestrians who took a seat would see a display with a live image of what appeared to be the street on the other side. However, the fun and creative part came into play when the screen introduced a scenario that would alarm the seated pedestrian. Several scenarios included flying saucers, an approaching tiger, and a standing pedestrian being pulled into a sewer by a giant tentacle. Pedestrians, some of whom got a brief scare, would walk to the other side of the panel only to see an ad for Pepsi Max.

With digital signage, you have the opportunity to display an ad that grabs consumer attention in ways that would not be possible with traditional forms of marketing.

How small business can compete and sail past big retailers

Digital Signage Kiosks Too Small to Compete? How...

We are constantly inundated with posts informing...

How To Solve The Biggest Challenge Facing Retailers

Unprecedented Change The retail industry is...

The Full Power of NFC and BLE Technology in DOOH

The Full Power of NFC and BLE Technology in DOOH...

How Does Android Change the Digital Signage Landscape?

How Does Android Change the Digital Signage...

5 Tips for Planning Mesmerizing Exhibition Display Content Studies show that sales increase by an average of 88% with...

END_OF_DOCUMENT_TOKEN_TO_BE_REPLACED

The Full Power of NFC and BLE Technology in DOOH

The Full Power of NFC and BLE Technology in DOOH Most people these days are familiar with those QR codes that seem to...

END_OF_DOCUMENT_TOKEN_TO_BE_REPLACED

How Does Android Change the Digital Signage Landscape?

How Does Android Change the Digital Signage Landscape? Digital signage systems are the new innovation in digital...

END_OF_DOCUMENT_TOKEN_TO_BE_REPLACED

The Leap to Digital Menu Boards

The Leap to Digital Menu Boards Static menu boards used to be favoured because of their cost-effectiveness. But the...

END_OF_DOCUMENT_TOKEN_TO_BE_REPLACED

Advertising In-Store How the Inner Walls of a Store Can Be Made Into Advertising Space Walk into any store and you...